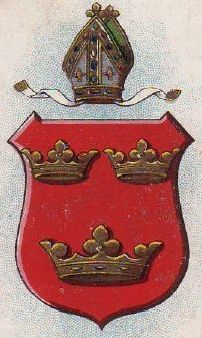 Gules three Ducal Coronets two and one Or.

The earliest recorded use of this Arms is by Bishop William de Luda in 1290. They are those assigned to S. Etheldreda, Queen of Northumbria and founder of the Abbey of Ely, in whose honour the Cathedral is dedicated.