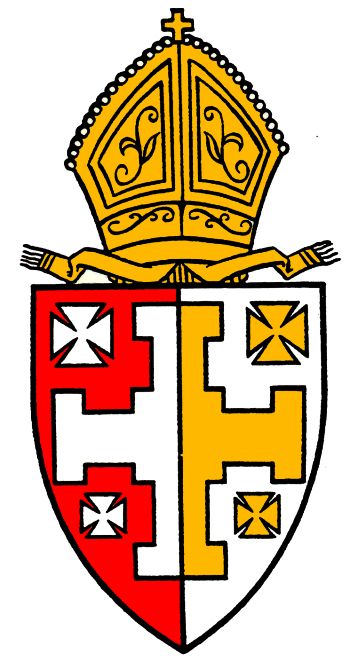 Per pale gules and argent, a cross potent quadrate in the centre per pale of the last and Or between four crosses patée, those to the dexter of the second and those to the sinister gold.

The arms above were recorded at the College of Arms.

The arms show the Cross of St. Chad, the patron saint of the diocese. Lichfield was made the episcopal see by St. Chad (Ceadda) in 669. The earliest seal on which arms are found for the diocese is that of William Booth (1447-1452) where a cross potent is seen as the diocesan arms.

The arms shown above with red and gold are the arms officially recorded by the College of Arms according to Briggs and Fox-Davies. However, the arms are more generally seen as counterchanged, i.e. only red and silver. A third version, with the cross countercharged and the small crosses gold is mentioned by Riland Bedford in 1856, and can for example be seen on the arms of bishop Smalbroke (1731-1749).

The counterchanged arms already appear on a contemporary painting of Bishop Robert Wright (1632-1643), see below, and are generally used since.