Diocese of St. Edmundsbury and Ipswich

DIOCESE OF ST. EDMUNDSBURY AND IPSWICH 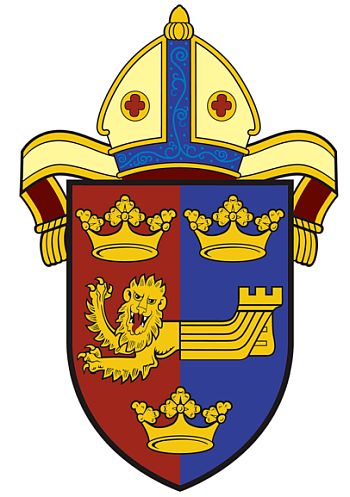 Per pale and azure, between three ducal coronets a demi lion passant guardant conjoined to a demi hull of an ancient ship [all Or].

This diocese was constituted by Order in Council, January 21, 1914.

The field of the arms recalls the two parent dioceses of Ely and Norwich, their colouring agreeing with the geographical arrangement of the two; the arms of Ipswich are also recalled. The crowns are derived from the arms of the diocese of Ely and also the attributed arms of St. Edmund, King of the East Angles, thus indicating Bury St. Edmunds and the ship and lion are taken from the arms of Ipswich conjoined in the manner in which they are borne by the Cinque Ports.