From Heraldry of the World
Your site history : Dock Landing Ship USS Germantown (LSD-42)
Jump to navigation Jump to search 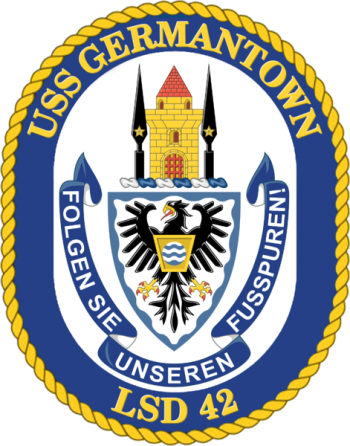 The Eagle symbolises the German Immigrants that founded Germantown outside Phliadelphia. The Keystone symbolises the the State of Pennsylvania. The fountain on the Keystone indicates the spring at the site of the Battle of Germantown 4 October 1777 between the British and the US Continental Army. The Eagle is armed in red and gold referring to the Marine Corps support of the Ships' amphibious assault missions. The Tower in the Crest is from the coat of Arms of the City of Krefeld, Germany from where the founders of Germantown came. The Bayonets refer to the Battle of Germantown and the two stars to the two ships named for this location. The Motto is a quote from Francis Daniel Pastorius, German Scholar and original settler of Germantown.