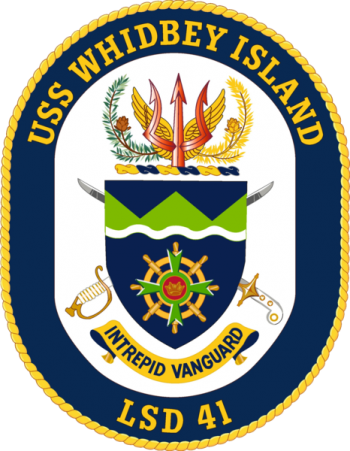 The colours bule and white represents the sea and the green the evergreen terrain of Whidbey Island. The Ships' wheel symbolises the sea-going pride and professionalism of the Ship's Crew. The Green Maltese Cross referse to the humanitarian mission of the first USS Whidbey (AG-141), the first ship of the US Navy to carry the name Whidbey. The Crown indicates the expedition under the British Crown , which explored the Pacific Northwest in the 1790ies. The Island in these waters is named for Lieutenant Joseph Whidbey, who was a member of this expedition. The Winged Trident represents seapower and the new dimension of amphibious warfare this ship introduces. The Wreath of Western Hemlock the State Tree of Washington represents the spirit of the Ships' namesake. The Naval and Marine Officers Sword symbolises the cooperation between the Navy and the Marine Corps in amphibious warfare.