From Heraldry of the World
Your site history : Dorset
Jump to navigation Jump to search

County and from April 1, 2019 Unitary Authority 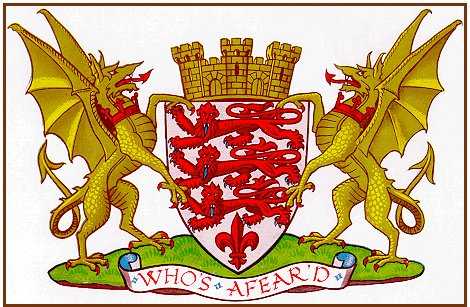 Arms : Argent three Lions passant guardant in pale and in base a Fleur-de-Lys Gules; the Shield ensigned with a Mural Crown towered Or.
Supporters : On either side a Dragon wings elevated and addorsed Or gorged with a Saxon Crown Gules.
Motto: 'WHO'S AFEAR'D'

The arms were officially granted on February 21, 1950.

In 1889 the County Council (when first created) debated the question of a seal and settled on three lions passant, taken from the oldest seal of the town of Dorchester, surrounded by the words 'The Seal of the County Council of Dorset'. After some discussion before the Second World War, the County Council applied to the College of Arms for a coat of arms in 1949, which was granted on February 21, 1950.

The three lions represent England and lions are found in the arms of Dorchester, Bridport, Lyme Regis, Weymouth and Blandford Forum. Lions' faces are in the coat of arms of Shaftesbury. The fleur-de-lis appears in the shields of of Dorchester, Bridport, Wareham and Shaftesbury. The mural crown is designed to echo the insignia of the Dorset Regiment and the Society of Dorset Men and the golden dragon of Wessex or Wyvern represented the ancient kingdom of Wessex.

The motto of 'Who's afear'd' was one of four originally suggested, including Lord Shaftesbury's suggestion; 'Excellence where Beauty Reigns'. 'Who's afear'd' was adopted by the Society of Dorset Men in 1905 at the suggestion of Thomas Hardy. It was converted to Dorset dialect by them in 1908, and was suggested to the County Council by a Colonel C.D.Drew, then curator of the Dorset County Museum.