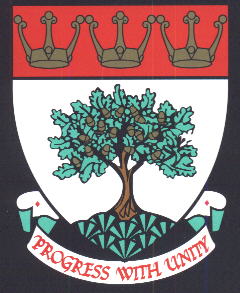 Arms: Argent issuant from a Grassy Mount in base an Oak Tree proper fructed Or on a Chief Gules three Saxon Crowns Or.
Motto: 'PROGRESS WITH UNITY'.

The oak tree is taken from the former arms of Ealing and Acton. The oak is also a common canting symbol for Acton (Oak town), Northwood and Southall (southern holt). The oak has twenty acorns, for the original twenty wards in the London borough. The chief shows three crowns for the three former Middlesex boroughs, the crown itself and the colours are also taken from the Middlesex arms. Previously Ealing used the arms below: 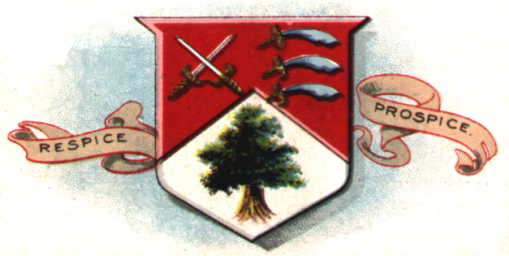 Arms: Per chevron Gules and Argent in dexter chief two Swords in saltire and in sinister chief three Seaxes fessewise in pale proper all with pommels and hilts Or and in base an Oak Tree eradicated also proper.
Motto: 'RESPICE PROSPICE' - Look backward, look forward.

The crossed swords are the symbol of St. Paul and taken from the arms of the See of London, to which the manor historically belonged. The axes are from the Middlesex county, the tree is a symbol taht Ealing is growing and flourishing.