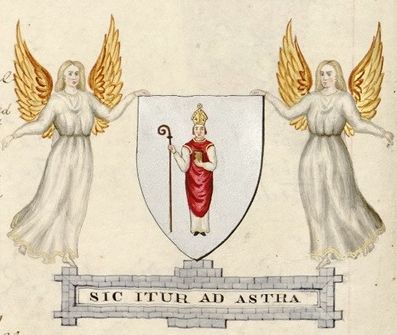 Argent, Sanctus Aegidius habi­ ted in his robes and mitred, holding in his dexter hand a pastoral staff and in his left hand a clasped book all Proper.

Supported by two angels Proper winged Or volant upwards, and the Motto "Sic Itur Ad Astra" upon a Compartment suitable to a Burgh Royal and for their Colours Red and White.

The arms resemble the device on the oldest known Burgh seal, believed to have been in use about 1296. They show St. Aegidius or Giles, the patron saint of the Burgh, but the version now in use is a Victorian interpretation of the blazon.

Although the Town Council duly matriculated its arms in 1678, no entry was then made in the Lyon Register. The omission was brought to light in 1888 and the arms were confirmed and added to the register.

The confirmatory Extract included a drawing showing St. Giles as a mitred Abbot in rather Anglican-type vestments; though this was much criticised by local experts at the time, the Council decided to accept it.

The angel supporters are unusual although similar ones were used by Cupar in the eighteenth century and were granted to Rutherglen in 1889.

The Latin motto "This is the way to immortality"­ comes from Virgil, Aeneid, ix, 641, and seems to refer to the legend that at his death the saint was borne heavenwards by the angels.

Elgin is the earliest known example of the use of a Royal Burgh compartment and is the only case where the colours are specified; red and white seem to have been chosen as they are the old colours of Moray. 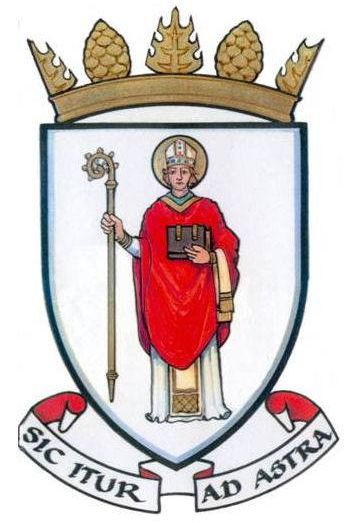 Argent, Sanctus Aegidius habited in his robes and mitred, holding in his dexter hand a pastoral staff and in his left hand a clasped book all Proper.

Above the Shield is placed a Coronet appropriate to a statutory Community Council, videlicet:- a circlet richly chased from which are issuant four thistle leaves (one and two halves visible) and four pine cones (two visible) Or, and in an Escrol below the same this Motto "Sic Itur Ad Astra".

The arms show the saint from the Burgh arms, but not the supporters. The crown is a crown for a community council.