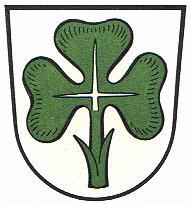 The present arms were officially granted on March 13, 1939.

The arms of Fürth are not very old. The trefoil first appears in a seal of the governor of the city for the Bamberg Abbey, Hornung. His seal shows the trefoil held by a hand and surrounded on each side by a crescent. In the 18th century three combined trefoils are used in images and on borderstones. In 1818 the city uses for the first time a single trefoil, surrounding oak branches, see images below.

The meaning of the trefoil, however, is not known.