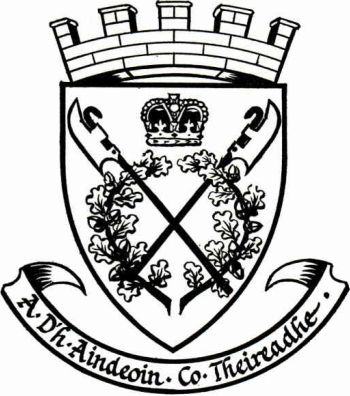 Argent, two Lochaber axes, heads upwards and blades outwards, saltirewise, intertwined with a chaplet of oak; in chief an imperial crown, all Proper.

[Above the Shield is placed a Burghal coronet] and in an Escrol under the Shield this Motto "A D'h Aindeoin Co Theireadhe".

The arms are virtually a replica of the device on the Burgh seal.

The crossed Lochaber axes recall that Fort William is the capital of that district and also the Battle of Inverlochy fought near by in 1645. The oak branches are the plant badge of Clan Cameron in whose lands the Burgh is situated and the Crown recalls the two royal names it has borne.

The Gaelic motto means "Gainsay it who dare" and is the same as that of Macdonald of Clanranald.