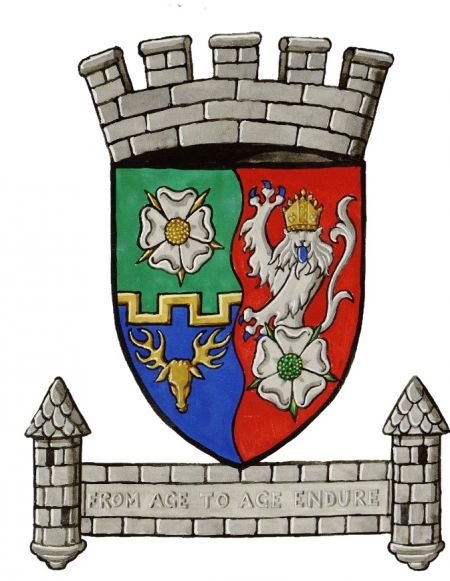 Below the Shield, which is ensigned with a Burghal coronet, is placed upon a Compartment suitable to a Burgh Royal this Motto "From Age to Age Endure".

Fortrose was the cathedral town of the old diocese of Ross, has a long and complicated burghal history. Fortrose was in 1455 made a Burgh in favour of the Bishops of Ross and annexed to the Burgh of Rosemarkie. In 1661 Parliament finally transferred the burghal rights to Fortrose and enacted that thence­ forward the two towns should comprise the Royal Burgh of Fortrose.

The Burgh arms refer to several important points in its history. The silver and gold rose on its green field recalls St. Moluag of Lismore, one of the famous Celtic missionaries, with whom the foundation of the Church at Rosemarkie is reputed to have been connected; the gold embattled barrulet is for the fort or Castle of Fortrose, and the golden stag's head on the blue field for the Mackenzie Earls of Seaforth who lived there.

On the other side of the shield is the silver lion of the Ross Earldom on its red field wearing a mitre to recall the former diocese of Ross; the lion issues from a second rose which was added as two roses appear on an old seal of the Bishopric of Ross; the two roses also make a pleasing heraldic pun on the names Fortrose and Rosemarkie, which have, however, no floral connections, but are derived from a Gaelic word meaning "a headland".

The wavy line down the centre of the shield stands for the Firth and the old Chanonry Ferry across it which was once an important north/south link.

The motto was a local suggestion, chosen to indicate the long heritage of the Burgh and the fact that so many of its citizens bear the same surnames as those of the seventeenth century or earlier.

The arms are now used by the Fortrose and Rosemarkie Community Council.