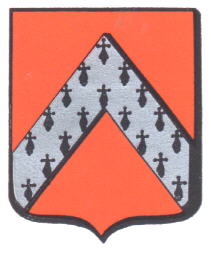 The arms already appear on the 14th century seals of the city, known from 1330. The city derived the arms of the Van Gistel family, who owned the village in the 12th century. Seals of the family, with a chevron, are known from 1219. In 1275 the chevrons was changed from silver to ermine, indicating that the city took the arms after 1275.