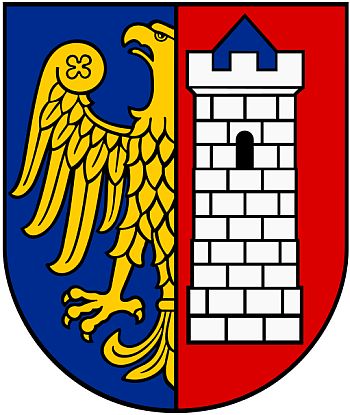 The above arms combine the eagle of Upper Silezia with a tower representing the city. These are the oldest historical arms of the city.

New arms were granted on August 14, 1629 by Emperor Ferdinand II of Austria. These showed the Austrian eagle combined with the eagle of Upper Silezia, with the tower in the middle, with the Emperor's initials on the gate, and above the gate the image of the H. Mary with child. These arms were used until the middle of the 20th century, but different versions were used, as the colours and the shapes were not well defined.