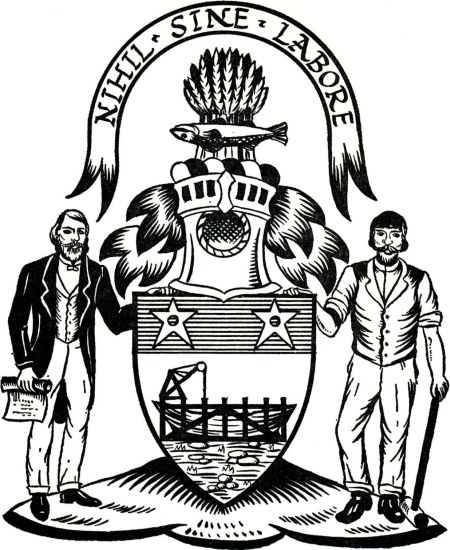 Argent, on land in base the hull of a ship on the stocks Proper; on a chief Azure, two mullets pierced of the field.

Above the Shield is placed a suitable Helmet with a Mantling Gules doubled Argent, and on a Wreath of the proper Liveries is set for Crest a garb surmounted of a salmon on its back Proper, and in an Escrol over the Shield this Motto "Nihil Sine Lahore", and on a Compartment below the Shield are placed for Supporters on the dexter side, an engineer holding in his exterior hand a plan, and on the sinister a ship carpenter resting his exterior hand on a mallet, both habited Proper.

Govan which became a Police Burgh in 1864, has a long ecclesiastical history going back to 565 when Constantine, King of Cornwall, is reported to have founded a monastery there.

The arms are based on the device on the Burgh seal in use at the time. They make reference to several industries which have been important to the life of the town. Ship-building, from modern times, is represented by the ship on the stocks and by the engineer and ship carpenter who support the shield. Agriculture and salmon fishing, from olden times, are recalled by the garb and salmon in the crest, the salmon also referring to Govan's close links with Glasgow.

The chief with its two pierced mullets and the garb in the crest come from the arms of William Rowand of Bellahouston and denote the close connection with Govan of his descend­ants, the Rowans of Homefauldhead.

The Latin motto "Nothing without hard work" is very fitting to the rest of the blazon.

The supporters were granted after some discussion, because of the Burgh's size, importance and historical antiquity.