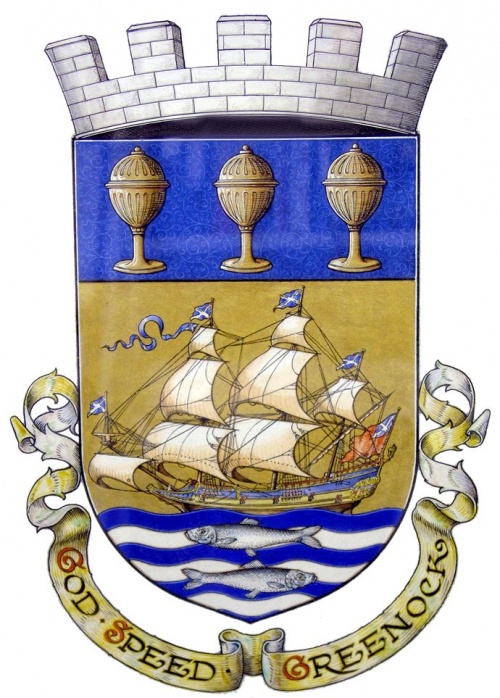 Or, a three-masted ship of the year 1641, in full sail Proper, flagged at each masthead and at the jackstaff with the banner of Scotland, viz.: Azure, a Saint Andrew's cross Argent, and at the stern with an ensign Gules, cantoned with the Arms of Scotland as above, in a sea in base undy of the Second and Third, two herrings counternaiant Proper; on a chief of the Second, three covered cups of the First.
Above the Shield is placed a Burghal coronet and below the Shield this Motto "God Speed Greenock".

Greenock was created a burgh in 1635 and a Burgh of Barony in 1641. The ship, whose four St. Andrew's flags were specially requested, and the herring in base denote the town's importance as a seaport and its connection with the fishing industry; the herrings also recall the quayside barrels on the old Burgh seal. The ship is depicted as a 1641 ship, based on the granting of the charter.

The golden cups on the blue field come from the arms of Shaw of Greenock.
The motto has been in use since about 1832