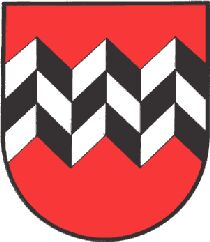 The bar symbolises the roof-patterns of the farms in the municipality that belonged directly to the Counts of Tirol. Originally mentioned as 9 farms in 1288, but later in the 18th century all farms wer eowned by the counts.