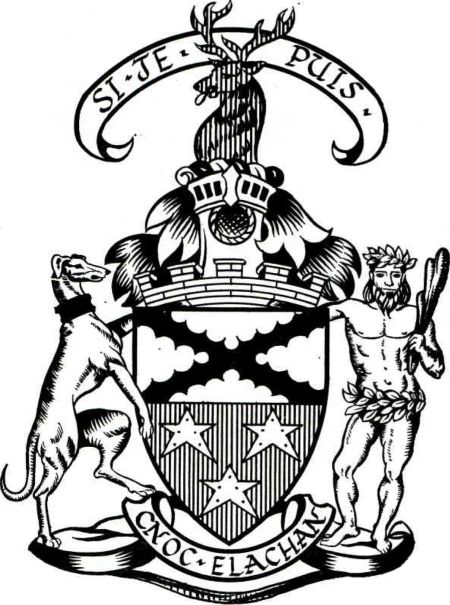 Per fess Argent and Gules: in chief a saltire engrailed Sable, in base three mullets Or two over one.

Above the Shield is placed a mural coronet with a Helmet befitting their degree with a Mantling Sable doubled Argent, and on a Wreath of their Liveries is set for Crest a stag's head Gules, and in an Escrol over the same this Motto "Si Je Puis"; on a Compartment with this Motto "Cnoc Elachan", are placed for Supporters, on the dexter, a greyhound Proper collared Sable, on the sinister, a savage wreathed about the temples and waist with laurel, holding in his exterior hand a club resting on his sinister shoulder, Proper.

The arms, which are a variant of the device on the original Burgh seal, fulfil the wish of Sir James Colquhoun that they should include some references to the Colquhoun arms and to those of his mother, who was a daughter of William, Lord Strathnaver and Master of Sutherland. Thus the upper part of the shield shows the black engrailed saltire of Colquhoun on its silver field and the lower part, the three golden stars of Sutherland on their red field.

The red stag's head crest and the greyhound supporter are also taken from the Colquhoun arms, and the savage from the Sutherland arms.

The French motto "If I can" is that of Colquhoun and the Gaelic one "The willow hill" is their war-cry. 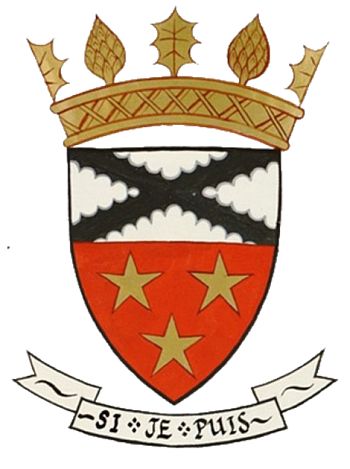 Per fess Argent and Gules, in chief a saltire engrailed Sable, in base three mullets Or, two and one.

Above the Shield is placed a Coronet appropriate to a statutory Community Council, videlicet:- a circlet richly chased from which are issuant four thistle leaves (one and two halves visible) and four pine cones (two visible) Or, and in an Escrol below the Shield this Motto "Si Je Puis".