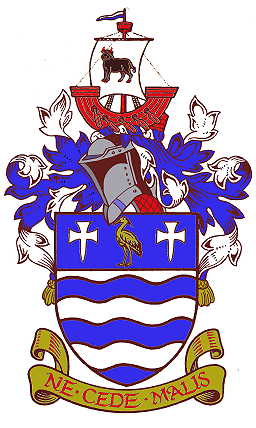 Arms : Barry wavy of six Argent and Azure, on a Chief of the last a Heron Or between two Crosses formee fitchee of the first.
Crest : On a Wreath of the Colours a Lymphad Gules with Pennant per fess Argent and Azure and the sail also Argent charged with a Bull statant Sable armed and unguled also Gules.
Motto: 'NE CEDE MALIS' - Yield not to adversity.

The blue and white waves are an obvious reference to the sea. The heron is allusive to the name, and was the device of the Council before the arms were obtained (see image below). The crosses, ecclesiastical emblems of Chist Church, denote the cathedral church of the Diocese and the parish church of Herie Bay.

The lymphad recalls the Roman occupation of the fort of Regulbium, now Reculver, and the ox is from the arms of Sir Henry Oxenden, one of the chief landowners in the district when Herne Bay was developed in the eighteen-thirties.