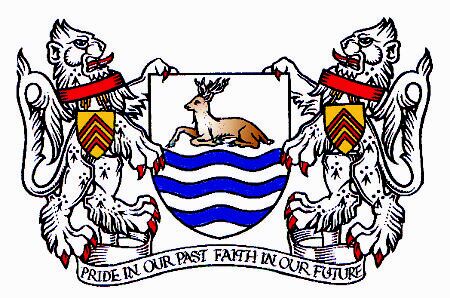 Arms : Argent on Water barry wavy a Hart lodged proper.
Supporters : On either side a Lion Ermine gorged with a Collar pendent therefrom by a chain Gules an Escutcheon Or charged with three Chevrons also Gules.
Motto: 'PRIDE IN OUR PAST FAITH IN OUR FUTURE'.

The arms were officially recorded in 1634, the supporters and motto were added on October 20, 1937.

The shield simply shows a Hart in a Ford, a pun on the town's name.

The ermine lions are from the arms of the Cecil family (compare with Westminster). They are made distinctive by Gold shields bearing red chevronells from the de Clare family arms.