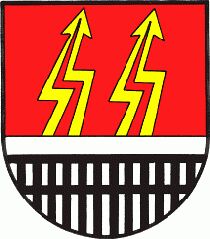 The flashes of lightning represent the important hydro-electric power plant at Hieflau. The lattice-design in base represents a masterpiece of engineering from about 1500: The great "Ennsrechen", a great wooden barrier in the river Enns, more than 250 metres wide, constructed to collect felled trees floating downriver. These logs were needed, among others, at the Erzberg iron ore mines (cf. coat of arms for Eisenerz). The barrier was destroyed at the beginning of the 20th century by a sudden flood of the Enns, but its remains can still be seen.