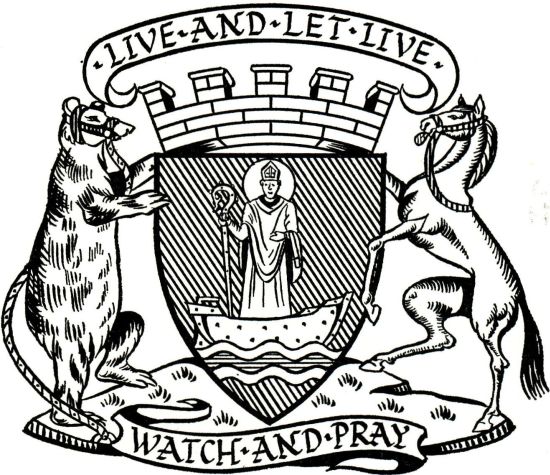 Vert, issuant from a bar wavy Argent in base, charged with a barrulet also wavy Azure, a boat Or, therein stand­ ing the figure of Saint Ronan, vested and mitred, all Proper, holding in his dexter hand a crosier of the Fourth.

Above the Shield is placed a coronet suitable to a Burgh masoned Sable, and in an Escrol over the same this Motto "Live and Let Live"; and in a Com­ partment below with this Motto "Watch and Pray" are set for Supporters, on the dexter side, a bear Proper muzzled Gules and therefrom a leash reflexed over its back Or, on the sinister, a bay horse langued and bridled Gules

Innerleithen developed through its woollen manufactures and because of its popularity as a spa-the medicinal properties of St. Ronan's Well were made famous by Sir Waiter Scott.

The arms show the figure of St. Ronan, the patron saint of the town, coming up the Tweed in a boat. The field is green to denote the fertile farming lands around lnnerleithen.

The supporters recall two famous local families closely associated with the Burgh: the bear is taken from the arms of the Stewart Earls of Traquair; Traquair House is just outside the town. The horse is taken from the arms of Horsbrugh of that Ilk; a bay horse was chosen because it is mentioned in a Roll of Horses dated 1298 that a bay horse, valued at twelve pounds, belonging to Sir Simon de Horsbrok, was killed in Selkirk Forest on 3 October in that year.

The two mottoes come from the seal adopted by the Burgh in 1892.

Similar arms are now used by the Innerleithen, Traquair and Glen community council.