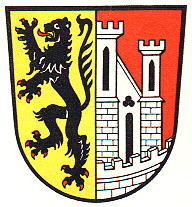 The arms were granted on October 8, 1886 and are a combination of the old lion of the counts of Jülich and a part of a fortified town.

Jülich became a city in 1238. It was fortified in 1280 and became one of the strongholds of the counts of Jülich. The first seal of the city, dating from around 1300, shows a shield with the lion placed before a castle. Smaller seals of the city only show the lion. The lion was used as arms of the city until this century when the present arms were devised.

The counts of Jülich (Gulik in Dutch), were one of the most influential families in the area, which is now partly Germany, partly The Netherlands. The oldest known use of the lion by the counts is from a seal of Wilhem of Jülich dating from 1237. The colours are mentioned in the Bigot roll of arms from 1254, and the Gelre roll of arms of the late 14th century.

In 1377 the counts of Gulik inherited the duchy of Gelre (derived from the town of Geldern), making them even more influential, as the duchy was one of the largest independent states of what is now The Netherlands. The lions of Jülich and Gelre were combined. This combination is now the arms of the Dutch province of Gelderland and the former district of Geldern. The combination is also part of the arms of many Dutch communities in the former duchy (like Mook en Middelaar, Linne and Tiel).