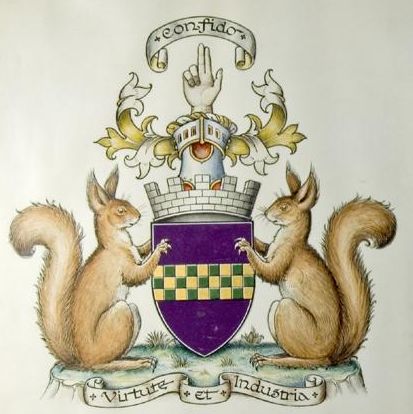 Purpure, a fess chequy Or and Vert.

Above the Shield is placed a coronet suitable to a Burgh and thereon a Helmet befitting their degree with a Mantling Purpure doubled Or, and on a Wreath of their Liveries is set for Crest a dexter hand couped Proper, the third and fourth fingers closed, and in an Escrol over the same this Motto "Confido", and on a Compartment below the Shield are set for Supporters two squirrels sejant Proper, and in an Escrol beneath this Motto "Virtute Et Industria".

The arms were officially granted on September 18, 1929.

The arms are based on the device on the Burgh seal, which shows the arms of Boyd, Earl of Kilmarnock. The field has been made purple instead of blue and the fess chequy gold/green instead of silver/red. The unique squirrel supporters of Boyd have been retained.

The second motto "Virtute et Industria" has been taken from one of the Burgh seals and replaces "Gold berry", a motto used by the Boyds to commemorate a victory by Robert Boyd over the Norsemen in 1263 at Gold berry Hill near Largs.

It is fairly certain, however, that the gold and green colours in the fess, which were a local suggestion, are intended as a direct allusion to the name "Gold berry".

The Latin mottoes mean "I trust" and "By virtue and by industry".