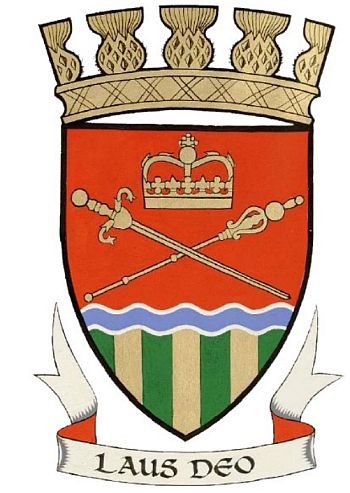 Gules, the Sword of State and the Sceptre of Scotland in saltire, in chief the Crown of Scotland Or, a closet wavy reduced Azure fimbriated Argent; on a base wavy Vert, three pallets Or.

Above the Shield is placed a coronet appropriate to a statutory District, videlicet:-a circlet richly chased, from which are issuant eight thistle-heads (three and two halves visible) Or; and in an Escrol below the Shield this Motto Laus Deo .

The arms are based on the arms of Kincardineshire County Council. The sword, sceptre and crown are taken from the county arms. The wavy bar represents the Dee river. The gold and green symbolise the rich countryside.

The motto "Laus Deo", means "Praise to God', and is taken from the arms of the Viscount of Arbuthnott, as the 14th Viscount was Lord Lieutenant of the county.