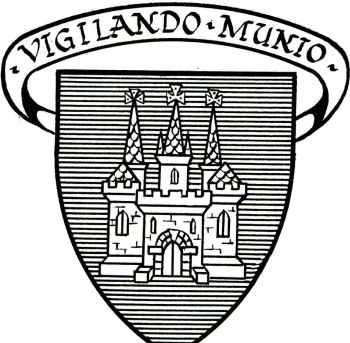 Azure, an abbey of three pyramids Argent each ensigned with a cross patee Or.

And on the reverse of the seal is insculped in a field Azure, the figure of Saint Bryce with long garments, on his head a mitre, in the dexter hand a fleur-de-lys, the sinister laid upon his breast, all Proper, standing in the porch of the church or abbey ensigned on the top as before, all betwixt a decrescent and a star in fess Or.

The Motto is "Vigilando Munio".

Kirkcaldy appears as a Burgh of the Abbot of Dunfermline in a Royal Charter dated between 1315 and 1324. It was not until 1644 that it was created a Royal Burgh by King Charles I.

The the abbey in the arms may refer to the church of Kirkcaldy dedicated in 1242 to St. Bryce, a disciple of St. Martin of Tours, or it may have some connection with the west gable of Dunfermline Abbey. 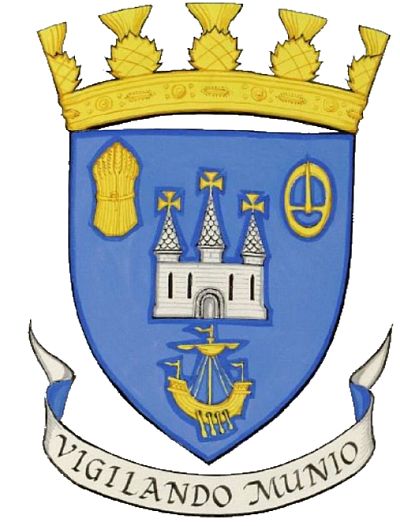 Azure, an abbey of three pyramids Argent, each charged with a cross pattee Or, between in chief dexter a garb and sinister a buckle and in base a lymphad, sails furled, oars in action, all of the Last.

Above the Shield is placed a coronet appropriate to a statutory District, videlicet:- a circlet richly chased, from which are issuant eight thistle-heads (three and two halves visible) Or; and in an Escrol under the Shield this Motto "Vigilando Munio".

These show the abbey from the arms of the Burgh of Kirkcaldy. To the Kirkcaldy arms have been added a gold buckle to mark the Leslie connection with part of the District, a garb in reference to its agricultural interests, and a galley for the shipping, fishing and other sea-faring interests of its coastal towns.

The Latin motto was the motto of the Royal burgh of Kirkcaldy.