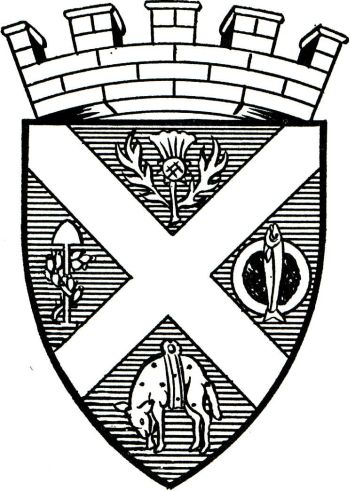 Azure, a saltire Argent between in chief, a thistle slipped Proper, on the dexter, a spade in pale blade upwards wreathed with heather Proper, on the sinister, a wooden platter surmounted of a barley meal bannock charged with a salt herring paleways Proper, and in base a golden fleece Or.

Above the Shield is placed a Burghal coronet.

The arms were officially granted on August 1, 1930.

Langholm was created a Burgh of Barony in favour of Robert Maxwell, 2nd Earl of Nithsdale, in 1621.

The arms are closely based on the device on the seal adopted by the Burgh in 1893. The Scottish saltire is used as a base, but this could also recall the Maxwell Earls of Nithsdale who have a saltire in their arms.

The silver and blue colours are also those of the Armstrongs who once owned Langholm Castle and have a special association with the town.

The thistle, the heather-wreathed spade, and the platter with the bannock and salt herring are emblems carried in the annual Common Riding Cere­mony at Langholm. The thistle is also the Scottish emblem and the golden fleece represents woollen manufacturing, which is an important industry of the town.

After much discussion, the Town Council decided against having a motto.