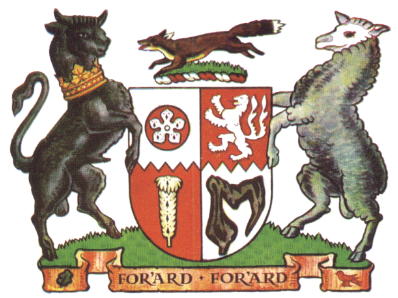 Arms : Quarterly per fesse indented Argent and Gules in the first quarter a Torteau charged with a Cinquefoil Ermine in the second quarter a Lion rampant double queued also Argent in the third quarter an Ostrich Feather Ermine in the fourth quarter a Maunch Sable.
Crest : On a Wreath of the Colours a Fox courant over Stubble proper.
Supporters : On the dexter side a Bull Sable ducally gorged Or and on the sinister side a Leicestershire Ram proper.
Motto: 'FOR'ARD FOR'ARD'

The arms were officially granted on 25 January 1930.

The third quarter is taken from the badge of John of Gaunt, Earl of Leicester in the 15th century.

The fourth quarter shoes a black maunch, or sleeve of a medieval lady's dress. It was the badge of the Hastings family, who built several castles in the county.The supporters represent the two main industries of the county for many centuries, a bull for grazing and a ram for the wool production. The bull wears a ducal crown, as several Earls of Leicester were also Dukes of Lancaster. The fox represents the fox hunting which started in the area in 1690.

A hazel leaf to the left of the motto commemorates the services of Lord Hazlerigg as Lord-Lieutenant of Leicestershire from 1925-1949. The martlet on the other side is taken from the arms of Sir Robert Martin, Chairman of the County Council from 1924-1960.