From Heraldry of the World
Your site history : Lewisham
Jump to navigation Jump to search 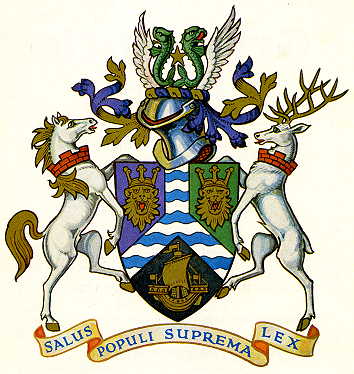 Arms : Tierced in pairle reversed Purpure Vert and Sable on a Pall also reversed Argent five Bars wavy Azure between in chief two Lions' Faces each crowned with a Saxon Crown and in base a Lymphad sail set Pennon and Flags flying Or.
Crest : On a Wreath Or and Purpure between two Dolphins haurient and addorsed Vert a Mullet Or all between two Wings displayed Argent.
Supporters : On the dexter side a Horse Argent crined and unguled Or and on the sinister side a Stag Argent attired and unguled Or each gorged with a Mural Crown Gules.
Motto: 'SALUS POPULI SUPREMA LEX' - The welfare of the people is the most important consideration

The arms were officially granted on March 7, 1966.

The background colours of green, purple and black allude to Lee Green, Hither (Heather) Green and Blackheath. The two lions' faces each crowned with a Saxon crown, as in the old arms of Lewisham (see below), symbolise the royal and Saxon connections both of Lewisham, where King Alfred was the first Lord of the Manor, and Deptford, where the same King fought the Danes. The golden ship in the base represents the famous Royal Shipbuilding Yard established in Deptford by King Henry VIII in 1513. The reversed pall consisting of wavy bars of blue and silver forms an heraldic map view, representing the meeting point of the rivers Ravensbourne and Quaggy, which was the original settlement point of what is now Lewisham, and then flowing north toward the River Thames.

The two green dolphins represent the close association of the Borough with things nautical and refer also to the dolphins which were the supporters of the unofficial device formerly used by the Metropolitan Borough of Deptford. The silver wings and golden mullet are from the arms of Lord Northbrook, Lord of the Manor of Lee.

The white horse is that of Kent, part of Deptford and nearly the whole of Lewisham having once been in that county and Deptford having used the horse in its old device. The silver stag is derived from one of the supporters of the Earl of Dartmouth, who is also Viscount Lewisham and the Lord of the Manor of Lewisham. The mural crowns are symbols of civic dignity and authority.Previously the council used the arms below: 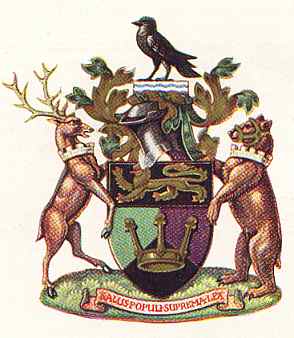 Arms : Tierce in pairle reversed Vert Purpure and Sable a Saxon Crown Or on a Chief of the third a Lion passant of the fourth.
Crest : On a Wreath of the Colours upon a Billet fessewise barry wavy Argent and Azure a Raven proper.
Supporters : On the dexter side a Stag and on the sinister side a Bear proper muzzled Or each gorged with a Mural Crown Argent.
Motto: 'SALUS POPULI SUPREMA LEX' - The welfare of the people is the highest law.

The arms were officially granted on November 27, 1950.

The green, purple and black divisions of the shield refer to Lee Green, Hither (Heather) Green and Black Heath, and the crown alludes to the Saxon associations of the district, where King Alfred was the first Lord of the Manor.

The blue and white waves and the raven are a punning reference to the River Ravensbourne.

Literature : Images and information provided by Laurence Jones and the Lewisham council (leaflet).