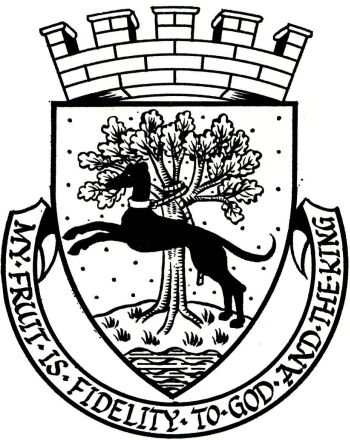 Or, a greyhound bitch Sable, chained to an oak tree within a loch Proper.

Linlithgow is a Royal Burgh of King David I created about 1138.

The Burgh is one of the four in Scotland with two coats of arms matriculated in the Lyon Register. The coat commonly used until 1975 is the second one, which shows the celebrated black bitch of Linlithgow chained to an oak tree standing on a mound in Linlithgow Loch.

The tree represents the former Royal Forest and the black bitch may also be connected with the chase; it may also recall one of the possible meanings of Linlithgow, "the lake of the grey dog".

Associated with this coat of arms, by long tradition, is the motto "My fruit is fidelity to God and the King"; although this is not recorded in the Lyon Office, it can be accepted as authentic.

The first coat shows St. Michael the Archangel killing the dragon; he holds a shield bearing the Scottish Royal Arms because the Burgh has had many links with the Royal Family, of which Linlithgow Palace was a favourite residence from the fourteenth century.

The Latin motto means "Michael's strength sets us all in heaven".

The Burgh uses both coats of arms with burghal coronets.