From Heraldry of the World
Your site history : Liverpool (England)
Jump to navigation Jump to search 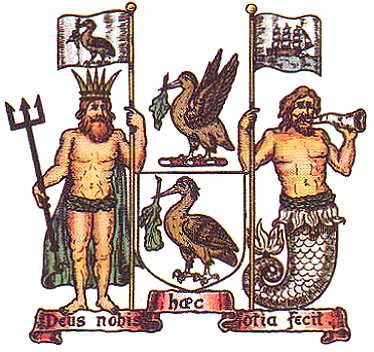 Arms : Argent a Cormorant in the beak a Branch of Seaweed called Laver all proper.
Crest : On a Wreath of the Colours a Cor­morant the wings elevated in the beak a Branch of Laver proper.
Supporters : On the dexter Neptune with his Sea-Green Mantle flowing the waist wreathed with Laver on his head an Eastern Crown Gold in the right hand his Trident Sable the left supporting a Banner of the Arms of Liverpool on the sinister a Triton wreathed as the dexter and blowing his Shell the right hand supporting a Banner thereon a Ship under sail in perspective all proper the Banner Staves Or.
Motto: 'DEUS NOBIS HAEC OTIA FECIT' - God hath granted us this ease.

The arms show a cormorant with a piece of seaweed in its beak. The cormorant also appears on the crest. The supporters are a Triton and Neptune, the God of the sea. They hold banners with the cormorant and a ship.

The arms shows the importance of the sea to the city of Liverpool.

The cormorant is often referred to as the Liver Bird, and is used widely in the city. Liverpool was founded in 1207 by King John. He needed a new port to ship his troops to Ireland and to control the Irish Sea. The new town adopted King John's seal as its own. The seal showed the eagle of St John holding a sprig of broom in its beak. The broom, or planta genista was the symbol of the royal house of the Plantagenets.
In 1644 the seal was lost and a new seal was made. For some strange reason the eagle was replaced by a cormorant, a more familiar bird in the area. It is likely that the artist mistook the eagle for a cormorant. The piece of broom was replaced by a piece of seaweed. The cormorant became later known as a mythical liver bird.

The bird also appears in the arms of Liverpool, Australia.

The motto can be translated as "God has bestowed these blessings on us", and is taken from Virgil.