From Heraldry of the World
Your site history : Loenhout
Jump to navigation Jump to search 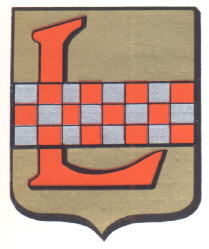 The arms show the chequered bar of the Counts of the Mark and a letter L, the town's initial.

When the council applied for arms in 1902 they had chosen for the arms of one of the former owners of the estate of Loenhout. The estate has been in the possession of many different families, among these the Counts of Aremberg, a branch of the Counts of the Mark. The family owned the estate in the late 15th century until 1610.