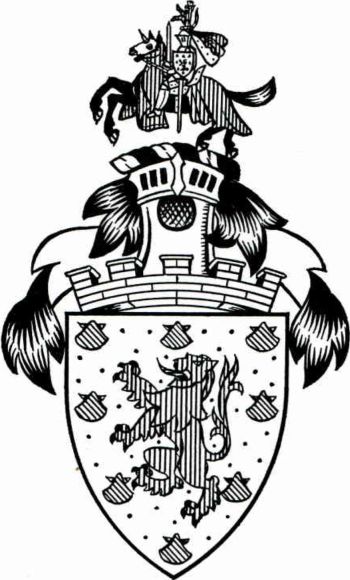 Or, a lion rampant Gules, armed and langued Azure, within an orle of eight escallop shells Vert.

Above the Shield is placed a Burghal coronet thereon a Helmet befitting their degree with a Mantling Gules doubled Or, and on a Wreath of their Liveries is set for Crest a knight armed at all points on a horse at full speed, in his dexter hand a sword erect, all Proper, his surcoat Argent, on his sinister arm a shield charged with the above­ mentioned arms of the Burgh, the visor of his helmet shut, over which issuant from a wreath of his liveries with a mantling Gules doubled Or is set a demi-lion rampant also Gules imperially crowned Gold, the caparisons of the horse of the Second, furnishings of the Third.

The arms show the red lion rampant of Macduff, Earl of Fife, on its gold field surrounded by eight green shells to recall the Duff founder of the Burgh on 1783.

The crest (a version of which was on the old seal, see below) is based on one of those used by Earl Fife and now by the Duke of Fife; this was copied from an old seal of Duncan, Earl of Fife, of which there is a 1360 impression on record.

The same seal was used in the design of the arms of Fifeshire County Council.