From Heraldry of the World
Your site history : Manchester
Jump to navigation Jump to search

1974-1986 : Metropolitan District of the Greater Manchester County, since 1986 a Unitary Authority 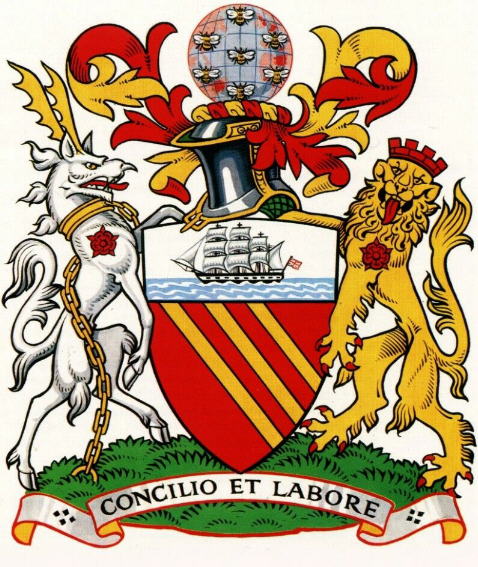 Arms : Gules three Bendlets enhanced Or a Chief Argent thereon on Waves of the Sea a Ship under sail proper.
Crest : On a Wreath of the Colours a Terrestrial Globe semee of Bees volant all proper.
Supporters : On the dexter side a Heraldic Antelope Argent attired collared and chain reflexed over the back Or and on the sinister side a Lion guardant Or murally crowned Gules each charged on the shoulder with a Rose of the last.
Motto: Concilio et Labore

The arms were officially granted on March 1, 1842. The supporters were granted one day later.

The golden bends in red are derived from the arms of the Lords of Manchester, who ruled the city prior to 1301. The chief shows a ship in full sail, a symbol of trade and enterprise. The crest shows a globe covered with bees, representing the world, to all parts of which the goods of the city are exported. The bees are a symbol of activity.The supporters, an antelope and a lion, are derived from the arms of King Henry IV, Duke of Lancaster.

The motto means 'By council and work', and is derived from a phrase in Ecclesiasticus 37:16 : 'Let reason be the beginning of every work and let counsel go before every action'.

Some examples of the arms in the city:

Literature : Information leaflet issued by the city of Manchester.