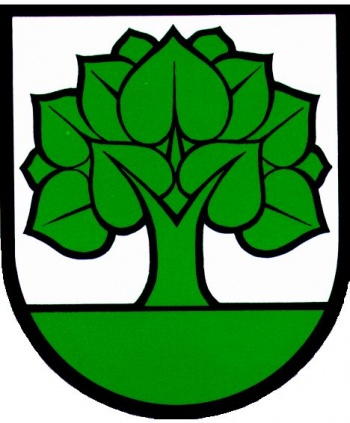 The arms were adopted on April 14, 1939 and show the local linden tree, the Märzlinde.

The arms were designed in 1939 as for the National Expo (Landesausstellung) in 1939 the municipality needed a banner and arms. On April 14, 1939 the local council applied to the State Archives with the arms as shown above. Two days later the municipal council adopted the arms.

The State Archives, however, did not agree with the arms, and they answered five years later, on June 10, 1944, that the image used by the municipality at the time was not very clear. The linden tree was not recognizable as such, it just looked like a tree. They thus proposed two new designs:

The council answered on June 15, 1944 that they had no intention to change the arms, as the arms were already used and were widely accepted in the village.

The State Archives accepted this fact in November 1944. However, in time, the linden became more stylised as in the original version of 1939 and now shows only a number of characteristic linden leaves as shown above.