From Heraldry of the World
Your site history : Midland Bank
Jump to navigation Jump to search 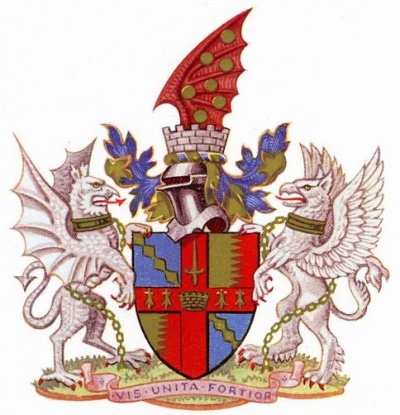 Arms: .* Quarterly, first and fourth azure a bend of lozenges conjoined Or, second and third per pale indented of the last and gules; over all a cross also gules, thereon in chief a sword erect proper, hilt and pomel of the second, and in fesse a mural crown between four ermine spots gold.·
Crest: On a wreath of the colours, issuant from a mural crown proper, a dragon's wing gules bezantee.
Supporters: On the dexter side a dragon and on the sinister side a griffin argent, each collared and with chain reflexed over the back Or.
Motto: Vis unita fortior.

If you have any information on these arms Bank mail us !