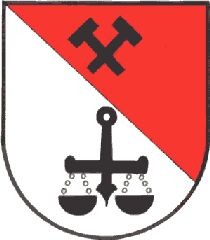 The division of the arms is derived from the arms of Eberhard Pittel, mentioned as Lord of Mieders in 1344. The upper half shows some miner's tools as a symbol for the former silver mining in the area. The scales in the lower half are a symbol of justice, since 1824 the Stubaital court is hold in Mieders.