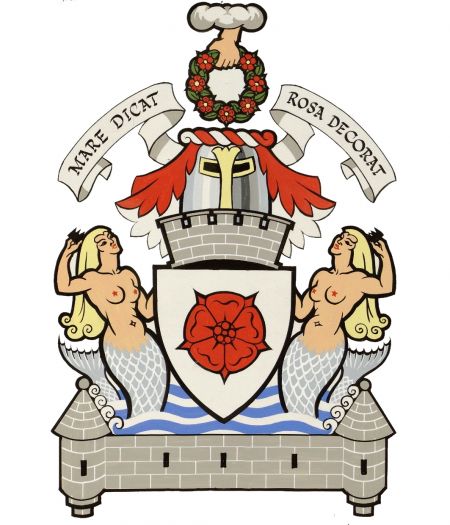 Above the Shield is placed a coronet suitable to a Burgh, thereona Helmet of befitting degree, with a Mantling Gules doubled Argent, and over a Wreath of the Liveries is set for Crest a hand issuing from a cloud and reaching down a garland of roses Proper, and in an Escrol over the same this Motto "Mare Ditat Rosa Decorat": and along with a Compartment suitable to a Burgh Royal are placed for Supporters two mermaids arising from the sea Proper.

And for a reverse of their seal, Gules, Saint Peter on the cross Proper, with the keys hanging at his girdle Or; which is also to be borne for the sacred flag of the said Royal Burgh and may be impaled with the principal Arms, Argent, a rose Gules.

The arms were granted on December 16, 1694 and again on January 23, 1953 with the addition of a coronet and a Royal Burgh compartment.

Montrose is thought to have been made a Royal Burgh between 1124 and 1153 by King David 1.

The rose has nothing whatever to do with the name Montrose which means "mossy headland" but could be an attempt at canting heraldry. There are on record impressions of the Burgh seal dated 1296 and 1357 and this would seem to strengthen the suggestion that the rose may be connected with the Dominican priory founded at Montrose in 1230 and dedicated to the Virgin Mary.

The silver and red colours are not easy to explain.

The crest of the garland of roses may recall the legend that St. Dominic introduced the rosary after being shown such a garland by the Virgin Mary.

The mermaid supporters symbolise the Burgh's situation by the sea.

The Latin motto "The sea enriches, the rose adorns" aptly sums up the achievement. 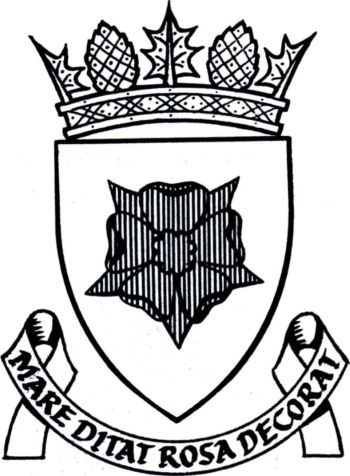 Above the Shield is placed a Coronet appropriate to a statutory Community Council, videlicet:- a circlet richly chased from which are issuant four thistle leaves (one and two halves visible) and four pine cones (two visible) Or, and in an Escrol below the same this Motto "Mare Ditat Rosa Decorat".

These are the Burgh arms with a crown of a community council and without the supporters.