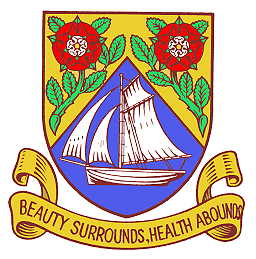 Arms : Per Chevron Or and Azure in chief two Roses Gules each charged with a Rose Argent barbed seeded slipped and leaved proper and in base a Fishing-Boat in full sail of the fourth.
Motto: 'BEAUTY SURRONDS HEALTH ABOUNDS'

The arms were officially granted on February 24, 1926.

The united roses were adopted to denote that a large portion of this Lancashire town's population has migrated here from Yorkshire. The boat refers to the old fishing industry, and can also be seen as a reference to the sailing undertaken in this pleasure and health resort. To which the motto also refers.