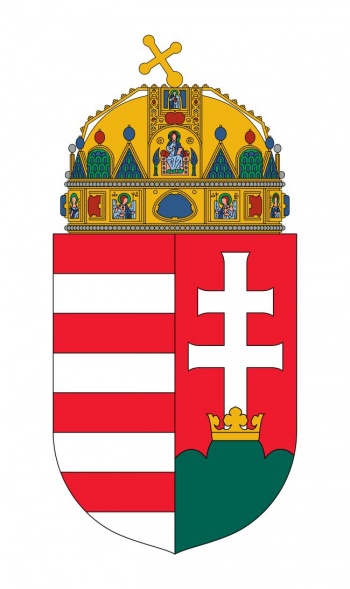 The arms were adopted after the independence of Hungary in 1919 and again on July 3, 1990.

The Coat of Arms of the Republic of Hungary is a vertically divided shield with a rounded base coming to a point. The left field contains eight horizontal bars of red and silver. The right field has a background of red and depicts a base of three green hills with a golden crown resting on the centre hill and a silver patriarchal cross issuing from the middle of the crown. The Holy Crown of St. Stephen rests on the top of the shield

The bars are taken from the arms of the first Hungarian royal house, the Árpáds. It was recorded first in 1202 on a seal. On the left is a double cross on a triple mound. The double cross has Byzantine origins, it came in Hungary in 1190.
The triple mound dates from the 14th century. In the Middle Ages only this side was the official coat-of-arm of the country. The present variation is from the 16th century.

On top of the coat is the Hungarian Holy Crown, the real royal crown that is in the Parliament now. The crown was made in the 12th century and one of the main symbols of Hungary.

The arms were abolisehd in 1944 and replaced by the arms below.

These arms show the same design, but placed on the logo of the ruling Arrow Cross Party.

In 1946 Hungary became a Socialist Republic, which initially used a design from the 1848 revolution (but without the smaller shields with the arms of the territories in the Kingdom of Hungary at the time) and the arms were totally abandoned and replaced by a socialist logo in 1949. After the 1956 revolt the unpopular 1949 was replaced for one year by the present arms without the crown. In 1957 a new socialist logo was introduced and used until 1990.

See also : Kingdom of Hungary and the Austro-Hungarian Empire

The arms on coins

Literature : Images from Wikipedia and en.numista.com