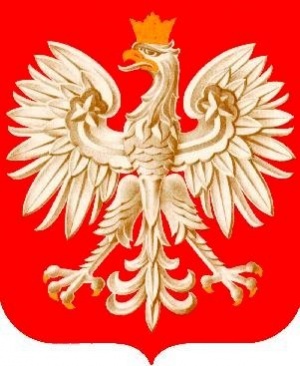 An old legend says that Poland was founded by Lech, brother of Czech and Rus - founders of Poland's southern and eastern neighbors. He settled in the place where he spotted a majestic white eagle in its nest. Hence the name of Poland's first capital city - Gniezno ("nest"), and the White Eagle in the Polish arms (which also appears in the Gniezno arms).

True or not, the White Eagle has been used by all rulers of the house of Piast dynasty - Poland's first ruling dynasty (10th - 14th centuries). Eagles appeared on seals, coins and standards. The first true Polish king, Przemysl I, made the White Eagle in a red field the Polish arms.

The design evolved over the centuries. In the 14th century a three-leaf pattern was added to the Eagle's wings, as we can see on King Kazimierz the Great's arms, see below.

In the 16th century the eagle became more ornamented. The shield also changed its shape from medieval to renaissance. Kings started to add their initials, as did Sigismung August (SA) for instance, see image below.

With the end of the Jagiellonian dynasty in the end of the 16th century kings were chosen by the nobility from among either foreign rulers or Polish aristocrats. Each newly elected king would add his family arms as an escutcheon to the eagle.

In the 17th century the shield had become oval and the insignia had been changed as well: the open crown, which used to show the allegiance to the German emperor, was replaced by a closed one to show that the Polish-Lithuanian Commonwealth was a sovereign power of its own. A sword and a baton were also added.

In the 18th century the Kingdom of Poland was divided by Russia, Prussia and Austria and the eagle thus disappeared. Poland re-emerged as an independent republic only after the First World War in 1918. In 1919 the parliament adopted the white eagle again as a national symbol, but without the escutcheon, sword or baton.

The design was changed by the President's decree in 1927. It gave the White Eagle a more modern look. It had again an open golden crown, a golden beak and golden claws. The traditional three-leaf pattern on the Eagle's wide-open wings was changed to five-pointed stars. The red shield became rectangular and was given a gilded edge.

After the Second World War the Communists removed the crown and in 1955 they removed the gilded edge.

After the fall of Communism in 1989 the crown was restored. The five-pointed stars were also associated with Communism so two points in each star were shortened in order to make the stars look more like the three-leaf, which results in the present arms (top image).