National Arms of the Solomon Islands

Your site history : National Arms of the Solomon Islands
Jump to navigation Jump to search

NATIONAL ARMS OF THE SOLOMON ISLANDS 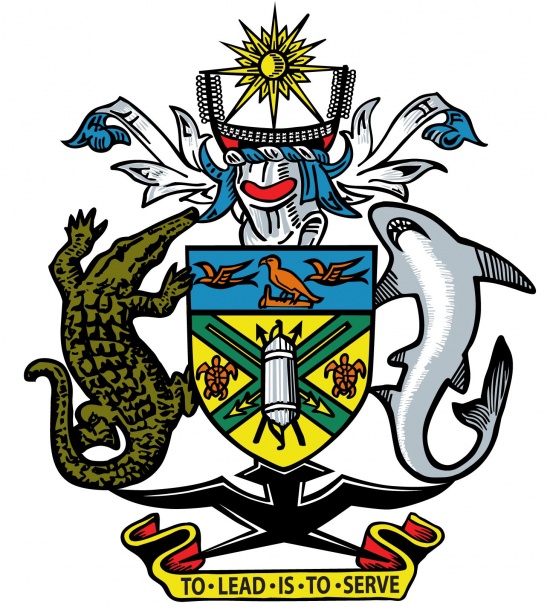 Arms : Or, a Saltire Vert charged with two spears in saltire, points in base and a bow and two arrows charged with a native shield in fess point, between two Turtles all proper, and on a chief Azure an Eagle sejant on a branch between two Frigate birds all proper.
Crest : On a helmet guardant, lambrequined Argent and Azure, a Solomon Islands war canoe proper and a Sun radiant Or.
Supporters : On the dexter, a Crocodile, and on the sinister a Shark, both proper.
Compartment : A stylised two-headed Frigate bird Sable.
Motto: To Lead Is To Serve

The arms were granted on July 7, 1978 and are based on the former colonial arms.

The arms show symbols for the different districts of the islands. The two turtles symbolise the Western District. The green cross with crossed spears, shield and arrows, symbolises the Central District. The eagle represents the island of Malaita. The frigate birds represent the Outer Islands.

The crest shows a sun over a traditional boat. The supporters are a salt water crocodile and a shark, two ferocious indigenous animals, suitable as protectors.

The shield is based on an image of a frigate bird standing on the motto To Lead is to Serve.

The second colonial arms were granted on September 24, 1956.

The four quarters are for the Malaita, Western, Central and Eastern districts. The lion passant is for the British Rule.

The turtle is a symbol for the Western district, the 8 points refer to the 8 main islands.

Before 1947 the colony only used a badge.