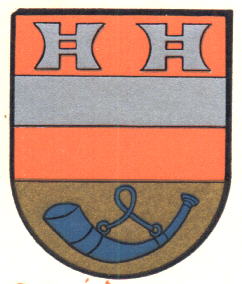 The upper part shows a red field with a silver bar and three wall anchors. These are the arms of the Von der Hees family, who had their estate in the village of Junkernhees, a part of Osthelden municipality.

The lower part shows a horn, the symbol of the Amt Ferndorf, to which the municipality belonged.