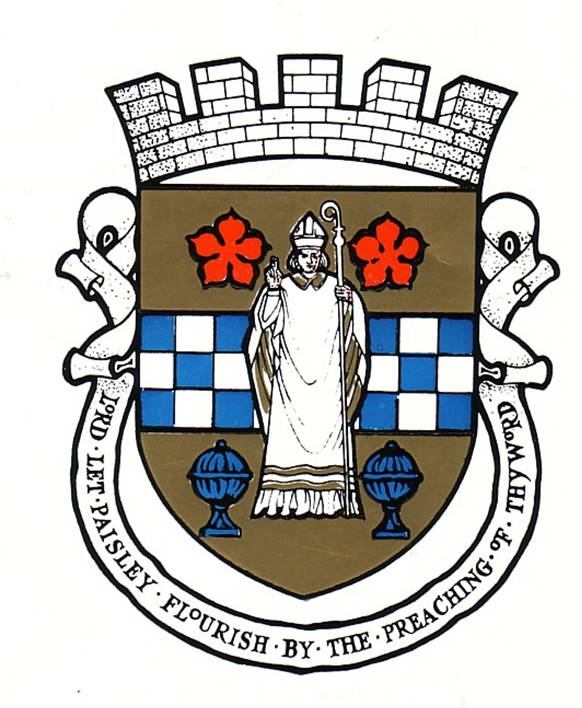 Or, a fess chequy Azure and Argent between two cinquefoils Gules in chief, and in base two covered cups of the Second, over all the figure of a mitred abbot, vested Proper, his dexter hand in the act of benediction and his sinister holding a crosier also Proper. Above the Shield is placed a mural crown and on an Escrol below the Shield this Motto "Lord, Let Paisley Flourish by the Preaching of Thy Word".

Paisley, was the largest, non Royal, Burgh in Scotland, was created a Burgh of Barony in 1488 and was raised to a Burgh of Regality in favour of Lord Claud Hamilton, Commendator of Paisley and 1st Lord Paisley, in 1587. it was made a Parliamentary Burgh under the 1832 Reform Act.

The arms repeat several of the features on the Burgh seal in use until 1912. The gold field and Stewart chequy recall Walter Fitzalan, High Steward of Scotland, who founded in 1163 the monastery, which later became Paisley Abbey, and also the long connection of the Stewart family with the town and its Abbey.
The mitred abbot represents the great Abbey of St. James and St. Mirren which, in pre-Reformation times, had a Charter of Regality.

The two red cinquefoils refer to the close relationship of the Hamiltons with the Abbey-at one time the abbacy had become almost hereditary in that family. The covered cups come from the arms of Shaw and commemorate Abbot George Shaw.

The motto is similar to that of Glasgow.