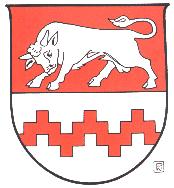 The upper half shows a bill, for the importance of cattle breeding in the region. The base is taken from the arms of the Lords von Walchen, who had their estate in the village in the 13th century.