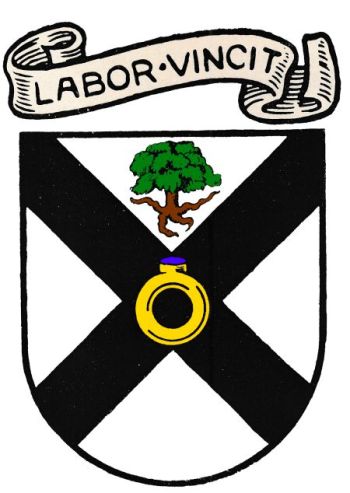 Argent, on a saltire sable an annulet or, stoned azure; in chief an oak-tree eradicated proper.

Pollokshaws was erected into a Burgh of Barony about 1813, and the charter was granted in favour of the then Sir John Maxwell of Pollok, hence the first part of the name. It came under the various previous Police Acts in 1858, and, under the Burgh Police Act of 1892, adopted a Common Seal.

The seal is an adaptation from the Pollok Coat of Arms, by permission from Sir John Stirling Maxwell, the then representative of the Pollok Family. It is one of the quarters of the Pollok Arms: "Argent, on a saltire sable an annulet or, stoned proper." The annulet or ring was a maternal difference added to the Arms of the Maxwells of Pollok from the House of Eglinton; and the saltire sable is from the Arms of the Maxwells, Earls of Nithsdale. See also Pollokshields.

An addition was made in the seal by introducing a tree between the upper arms of the saltire, which tree alludes to the latter part of the name, "shaws" (from an old Scottish word " shaw " or " schaw " [schagh], meaning a wood or a grove), as indicating that the surrounding country was of a thickly wooded character in times long past.