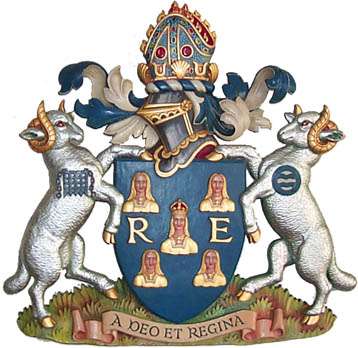 Arms : Azure five Maidens' Heads in saltire couped at the shoulders and vested proper each crined and wearing a Necklace and Pendant Or the centre head imperially crowned Gold the Cap Gules in fess the Letters RE also Gold.
Crest : On a Wreath Argent and Azure issuant from a Circlet of four [inverted] Escallops and as many Lyres alternating Or a Mitre proper.
Supporters : On either side a Ram Argent armed and unguled Or charged on the shoulder the dexter with a Portcullis chained Azure the sinister with a Hurt thereon a Plate charged with two Bars wavy also Azure.
Motto: 'A DEO ET REGINA' - From God and the Queen.

The arms were recorded in 1566, and were based on the common seal of the town, which was in use as early as 1365. In this seal, still in use today, the heads are those of men, the middle one wearing a Saxon crown. It has been suggested that the central head represented Edward, King of the English (975-8), assassinated at the instigation of his stepmother, Queen Elfrida, in order that her own son should occupy the throne. In expiation of her crime, Elfrida founded a nunnery at Reading on the site of St Mary's Church.

The letters RE are found on the Arms of the 1566 grant but omitted in the one of 1623 and subsequently until they were restored in 1953. The exact meaning of the letters 'RE' is not known. Some authorities consider that they stood for the first two letters of the name of the town. As their first known use was in the reign of Queen Elizabeth I, some consider that they stood for Regina Elizabetha. Their re-introduction in the present Borough Arms may also be regarded as a tribute to Queen Elizabeth II, in whose coronation year these new arms were granted. The crest and supporters were granted by the College of Heralds in 1953. The crest is an Abbot's mitre encircled at its base by alternating gold escallop shells and lyres. The mitre commemorates the once magnificent Reading Abbey; the escallop shells (once used as badges by pilgrims) represent the pilgrims or palmers who came there: the lyres are symbolic of the Abbey's musical fame. The shield is supported by two white rams with golden horns and hooves. They represent the early wool trade of Reading. The ram on the left-hand side of the shields bears a portcullis on its shoulder, which represents the Borough. The sign on the shoulder of the other ram represents two springs, symbolic of the rivers Thames and Kennet, which flow through Reading. The Motto is: A Deo et Regina (With God and Queen).