From Heraldry of the World
Your site history : Rhinow
Jump to navigation Jump to search 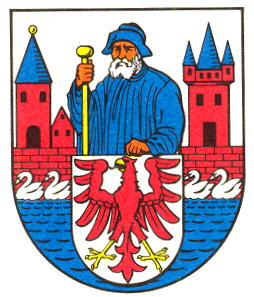 The arms first appeared on a stained glass window from 1580 in the city hall, but are most likely much older. Later seals all show the same composition. The saint is St. James (Jacobus), patron saint of the city. The small shield shows the arms of the Margraves of Brandenburg. The city wall indicates the fortified character of the city.