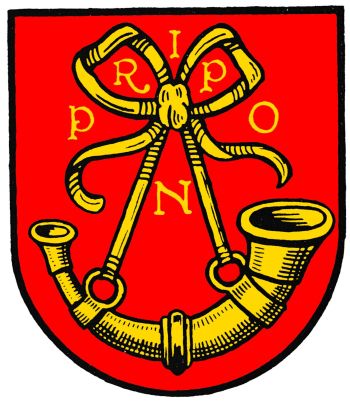 Gules, a gold bugle horn with the letters R I P P O N disposed about the bow in which the strings are tied.

The arms were never officially granted, the image above is the design generally used, however the colours have changed during the years. Often the arms are also shown with a spur as a crest, see images below.

The horn appears to have been used from centuries as the symbol of Ripon, but the spur was introduced at the early 20th century, probably to signify the trade of spur-making for which the city was famous in the Middle Ages. The horn refers to the Charter horn (when rights were conferred upon the City as a community in a.d. 886) and this Charter horn is carried attached to the baldrick which is worn by the Sergeant-at-Mace, who precedes the Mayor with the Mace on all ceremonial occasions. The Charter horn was never a blowing horn, but the custom of blowing a horn at the four corners of the Market Cross and in front of the Wakeman's (Mayor's) house at 9 p.m. each evening has been carried out for hundreds of years.

The horn and spur are still used by the city council as a logo, but not placed in a shield.