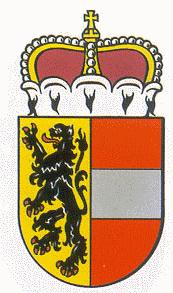 The arms were officially granted in 1921.

In 690 a monastery was founded on the Roman ruins of Juvavum. In 739 the village around the monastery became the Diocese of Salburg, in 798 Salzburg became an Archdiocese. As in many parts of the former Holy Roman Empire, the Archbishops ruled their territory as a powerful state. The State of Salzburg was an independent state between Austria and Bayern until 1803, when all religious states were abolished. Salzburg became a Principality under Archduke Ferdinand IV of Tuscany. In 1806 the Austrian Emperors acquired the principality, which was successively conquered by Bayern in 1810 and by Austria again in 1816. Only the western part remained part of Bayern. Ever since Salzburg is part of Austria.

The arms for Salzburg first appear on a coin issued by Archbishop Rudolf between 1284 and 1290. The arms, however, probably date from the reign of Archbishop Ulrich of Kärnten (1246-1256), as the arms are probably based on the arms of Kärnten. The typical hat appears in the early 19th century.

The lion is probably taken from the arms of the Dukes of Kärnten, but may be derived though some branches of the Staufen family (see Württemberg). The meaning of the silver bend is not known, it is older as the use or relation with Austria itself.