From Heraldry of the World
Your site history : Schleswig-Flensburg
Jump to navigation Jump to search 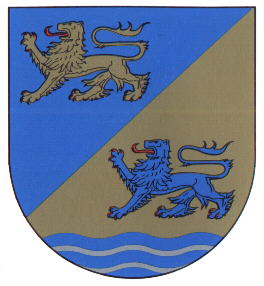 The arms are derived from the old arms of the Schleswig, which showed three lions. The two lions each in a separate field, symbolise the two former districts. The waves in the base of the shield symbolise the Baltic Sea and the many inlets and bays in the district.